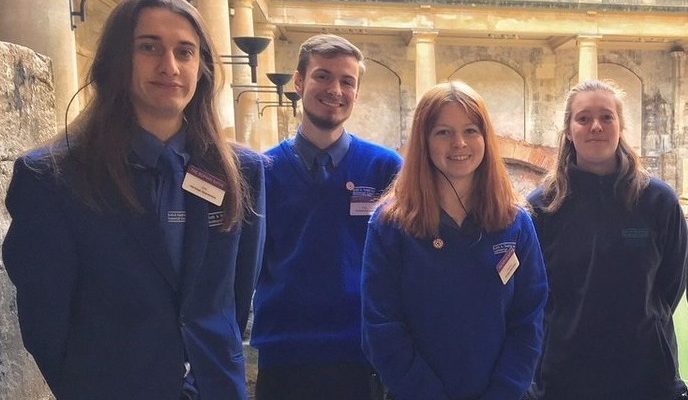 Writhlington School are delighted to hear from former students. Josh Gibbs took time to inform us about his role at an Apprentice Ambassador.

Until I started Sixth Form, I hadn’t even considered doing an apprenticeship. I had always just assumed that I would go to University because my grades were good and I felt like that is what I was expected to do. It wasn’t until my brother started his apprenticeship at the Ministry of Defense, that I even considered it as an option.

The main appeal of apprenticeships to me, at the time, was that I was sick of sitting in classrooms learning about things. I wanted to actually go and do something. I wanted to learn a skill and be a part of the working world and feel like I was contributing to a team.

So I decided to become an apprentice commis chef, which is where I learned about another benefit of apprenticeships. It is actually not that difficult to start over if you need to. I realized that the catering industry wasn’t for me and I quit. I spent a while looking for other apprenticeships until I found a Heritage Services Apprenticeship at the Roman Baths.

The application process for apprenticeships was actually relatively simple. The resource I used was the government website www.gov.uk/apply-apprenticeship. I found this to be an excellent resource as a large number of apprenticeships were posted there and you could filter by level and industry and could search within a certain radius. The site had built in application questions and employers could add their own as well. Your answers to the questions that the website had would actually be used for all applications unless you change it in one. This also saved me a lot of time.

At the Roman Baths, I cycled through the various teams there over the course of a year. Another thing I learned about apprenticeships here is that, although you are given extra guidance and support, you are expected to become an effective member of the team relatively quickly. This is great as it means you pick things up quickly, and most people are more than happy to teach you things.

I have finished the apprenticeship course and I am currently just waiting to receive my certificate. I am still working at the Roman Baths as a Visitor Experience Host – selling tickets, giving tours, that kind of thing. Working here really has improved my self-confidence and public speaking skills.