They call this classical

It was a little bit exciting this morning before school. The morning meeting started like many others with teachers meeting in the theatre. This morning, however, instead of the usual notices we were treated to a solo performance by classical guitarist, Manus Noble. It was wonderful to see everyone spellbound as he demonstrated the wide possibilities afforded by such a simple looking instrument. Manus then proceeded to play for our Year 12 and 13 students who were equally enthralled.

One of the UK’s leading classical guitarists, he started playing the guitar aged 7. When he was 14 his dad decided to take him to a guitar concert by Gary Ryan who is Head of Guitar at the Royal College of Music. Realising that it was possible to become a professional musician, Manus cites this concert as the turning point. He was fortunate to study under Craig Ogden to improve his technique and was successful in obtaining a place at the Royal College of Music where he studied under Gary Ryan who had inspired him several years before. Manus went on to graduate with First Class Honours and the Royal Academy of Music with Distinction.

Manus did mention that he felt the word ‘classical’ can be off-putting to some. The term ‘classical’ is used to cover a wide range of musical genre which can cover anything from Medieval liturgical (religious) music to music being written in the present day. It can have its feet planted firmly in the age of Bach and Beethoven or it can tap African beat, Western folk or Jazz. It can be melodious or avant-garde. There is something for everyone, don’t be put off by the title.

We are so fortunate to be able to offer our students the opportunity to attend concerts by some of the UK’s most talented musicians in school. Not divided by the orchestra pit we are really fortunate to be able to get really close to the performer which will add an extra immediacy to the performance itself something most people who go to venues like the Corston Halls, Royal Albert Hall and the Royal Festival Hall cannot do.

Manus Nobel will be playing at Writhlington as part of our Vital Art concerts in June. However, our programme of live music starts this Friday with Ben Goldscheider and Richard Uttley.

Tickets cost £12 on the door or £1 per ticket for Vital Art Club Members. Membership is open to all staff and students at Writhlington School and costs £15 for the academic year. Membership and tickets can be purchased through ParentPay. 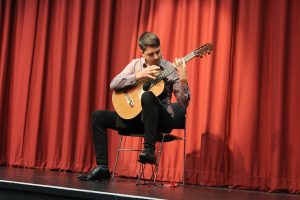 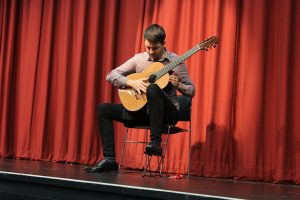