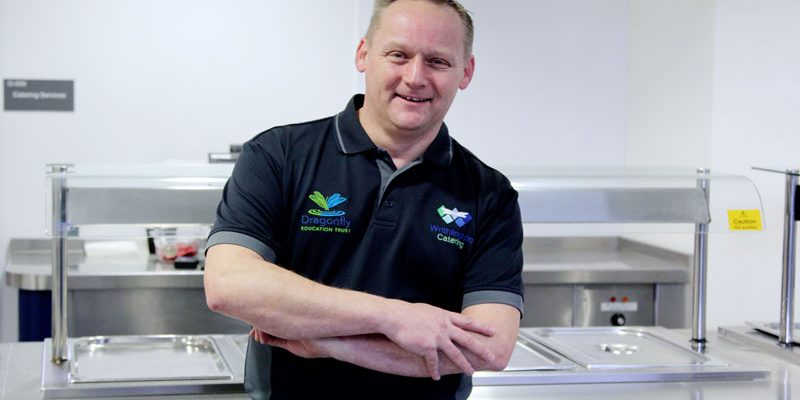 Gary Monger, Catering Manager travelled to Birmingham on behalf of, Writhlington School, Mendip, Peasedown Primary and Jones Food Solutions to take part in the Landmark Masterclass Chef competition where he was crowned champion’.

The competition was hosted by Celebrity Chef, Phil Vickery, the ‘This Morning’ TV Chef who champions Gluten Free cooking and is celebrated across the world for his outstanding recipes and sensitive approach to English cooking.

“The day began with a Masterclass on Gluten Free cooking, which was really fascinating followed by a ‘Ready Steady Cook’ cook style cooking competition.”

Chefs had travelled from across the country to take part and were asked to pick an envelope that contained a protein to cook with and pair with other ingredients, the chefs had 90 minutes to prepare two courses to be judged by Chef Vickery.

“It was very intense but really good fun. I created a herb crusted Salmon with Sweet Potato and Kale Dauphinoise for my main dish which Phil Vickery said was ‘cooked to perfection’ and a Caramelized Strawberry and Apple Sponge with Chantilly  Cream for dessert which he said was amazing and one of the best Gluten Free Desserts he had tasted. All our meals had to be gluten free, at Writhlington, Mendip and Peasedown we offer a diverse menu that caters really well for Gluten Free students and so I was familiar with Gluten Free alternatives.

We are now designing our Spring and Summer menus and this has certainly given me some fantastic ideas. I am really passionate about cooking for young people, food not only powers the mind but it can inspire and that is the kind of magic I like to create in my kitchens.’
As well as receiving the coveted trophy, Mr Monger received a cash prize and will be featured in national acclaimed catering magazines, including a double page spread, celebrating Writhlington, Mendip and Peasedown catering.